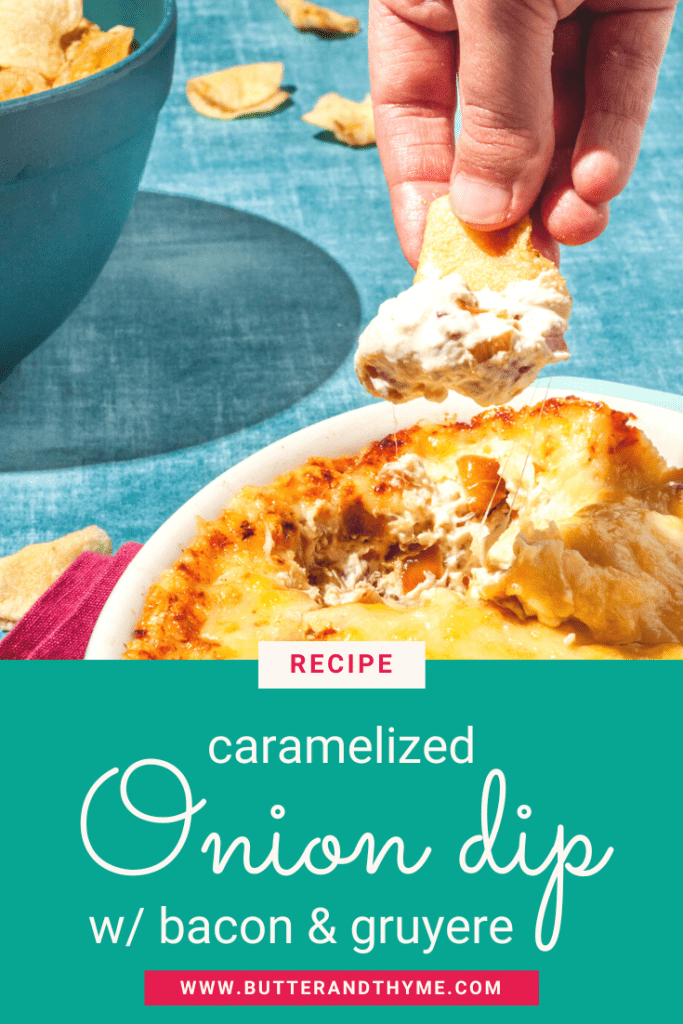 Sour cream and onion dip has always been my favorite appetizer. I've been known to call it my kryptonite (lol). Usually, I reach for the Lipton soup mix onion dip, but when I'm feeling fancy, I'll make this baked caramelized onion dip recipe with bacon and gruyere!

It has all the things you love about sour cream and onion dip, but then you take it up a notch by adding a ton of caramelized onions and a layer of broiled cheese on top. It's kind of like if onion dip and french onion soup had a baby. I usually serve it with kettle cooked potato chips, but it would also be great with crackers or toasted bread.

This cheesy caramelized onion dip is the perfect addition to your appetizer spread on football Sundays! If you're looking for more game day appetizer recipes, try these delicious air fryer croquettes too ◡̈

To make this delicious cheesy baked onion dip, start by crisping up the diced bacon in a large skillet. Choose a larger pan than you think you'll need. You'll use the same pan to caramelize the onions later.

I'd also recommend using a stainless steel skillet over a nonstick skillet for this recipe. This way, you can scrape off the caramelized bits of bacon and onion when you deglaze the pan. These flavorful bits, called fond, then get mixed into the caramelized onion mixture and it adds SO much flavor to the dip!

Once the bacon is nice and crispy, remove it from the pan using a slotted spoon, leaving the rendered bacon fat behind. Now, we'll caramelize the onions in the bacon fat for extra bacon-y flavor. Or if you skip the bacon, start out with a little vegetable oil instead.

How to Caramelize Diced Onions

Typically, caramelized onions are thinly sliced. I'm not sure if this is due to tradition, but you can caramelize onions no matter how they are sliced or diced. The important thing is that they are cut into evenly sized pieces so they cook evenly. Also keep in mind, smaller cuts will cook more quickly.

I chose to dice the onions for this recipe to make the onion dip easier to eat. If you want to learn more about how to dice an onion, this video is an excellent resource.

Here, I'll go through how to caramelize diced onions for maximum sweetness and depth of flavor.

There are some tricks that supposedly speed up the process of caramelizing onions, but they don't really work. Yes, the onions will brown faster if you add baking soda, but they won't produce the same depth of flavor. Caramelizing onions requires some patience. It takes at least 45-60 minutes to caramelize the natural sugars in the onions, turning them from bitter and pungent to sweet.

If you're curious to learn more about caramelizing onions and the science behind it, check out this article from Serious Eats.

Combine the rest of the ingredients in a mixing bowl: cream cheese, sour cream, spice mix, thyme, and other seasonings. Add the cooked bacon and caramelized onions, and mix well to combine.

Transfer the onion dip mixture to a broiler-safe baking dish. Then, top with a layer of shredded cheese. Place the dish in the oven and cook at 350 degrees F until the cheese is fully melted.

After the cheese is melted, I like to lightly broil the top of the cheese so that it turns golden brown. You can skip this step if you don't feel comfortable using the broiler.

When you place greasy foods too close to the broiler, it has potential to catch on fire. This dip contains bacon + gruyere, which is a relatively high-fat cheese, so you might see a layer of grease form on top after baking. You'll want to blot this with paper towels to remove excess grease before switching to broil.

Also, make sure there is at least 4-6 inches of space above the dish, and make sure your dish is broiler-safe. If you're not familiar with your oven's broiler, start with the broiler set to low and keep a very close eye on it. The onion dip should only take a minute or two to brown on top!

To make a vegetarian version of this baked caramelized onion dip, omit the bacon and Worcestershire sauce. (Worcestershire contains anchovies if you didn't know!) You can add a small splash of soy sauce instead if you'd like.

You can also turn this into a cold caramelized onion dip recipe! Just don’t add the flour or cream cheese, and use the full pint of sour cream instead. You also won’t need the cheese for a cold dip. It would be more like a copycat Lipton french onion dip this way, just jazzed up with caramelized onions.

Like many au gratin dishes, it's easiest to serve this dip in the same vessel that you bake it in. Since this onion dip recipe makes approximately 3 cups, it works best with a dish that has a capacity of about 4 cups (or 1 quart).

Something like this oval au gratin dish would be perfect! You want a dish that's thermal resistant, so it's safe to bake or broil under high temperatures. And ideally, it's also cute enough to double as a serving dish.

As far as portions go, this recipe serves approximately 3-4 people. It’s meant to be an appetizer, so it really depends on how many other appetizers you’re having and how hungry you are...

This recipe can easily be doubled (or even tripled!) if you're feeding a larger group. Just make sure to choose a baking dish that fits the volume of the dip you’re making. The process is the same, just double all of the ingredients.

You can easily make this dip ahead of time, and it actually tastes better that way! Letting onion dip chill in the fridge for a few hours or even days allows flavors to meld. Make the dip through step 3, then finish by topping with cheese and broiling just before serving.

And because it's onion dip, I like to serve it with potato chips. Thicker kettle-cooked chips work better since this dip is fairly thick and heavy. Especially with the cheese layer, thin potato chips are just too brittle. You could also serve this dip with crusty bread or hearty crackers, if you prefer.

This onion dip keeps for about 4 days in the refrigerator. I personally wouldn't recommend reheating it. I find that the cheese layer is usually the first to go anyway. So I just transfer the extra dip to a Tupperware and eat the leftovers as a cold dip.

What does it mean to sauté vs. caramelize onions?

The main difference is the amount of time and the taste. You can sauté onions over high heat for 10 minutes, and they will soften and brown, but they will still taste pungent and oniony.

Caramelizing onions is done over low heat and takes at least 45 minutes to an hour. This slow cooking method breaks down the onions in a way that transforms their natural sugars, so they taste sweeter and less pungent.

Can you caramelize onions in the oven?

Yes! Although, I prefer the stovetop method because you can get a better look at them as they're caramelizing. And you can stir them often, which helps them to cook more evenly.

If you want to try the oven method for caramelizing, toss sliced or diced onions with some oil and place on a rimmed sheet tray with a little bit of water. Then bake at 400 degrees F. You'll still want to stir them every 10 minutes or so for even cooking. 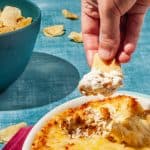