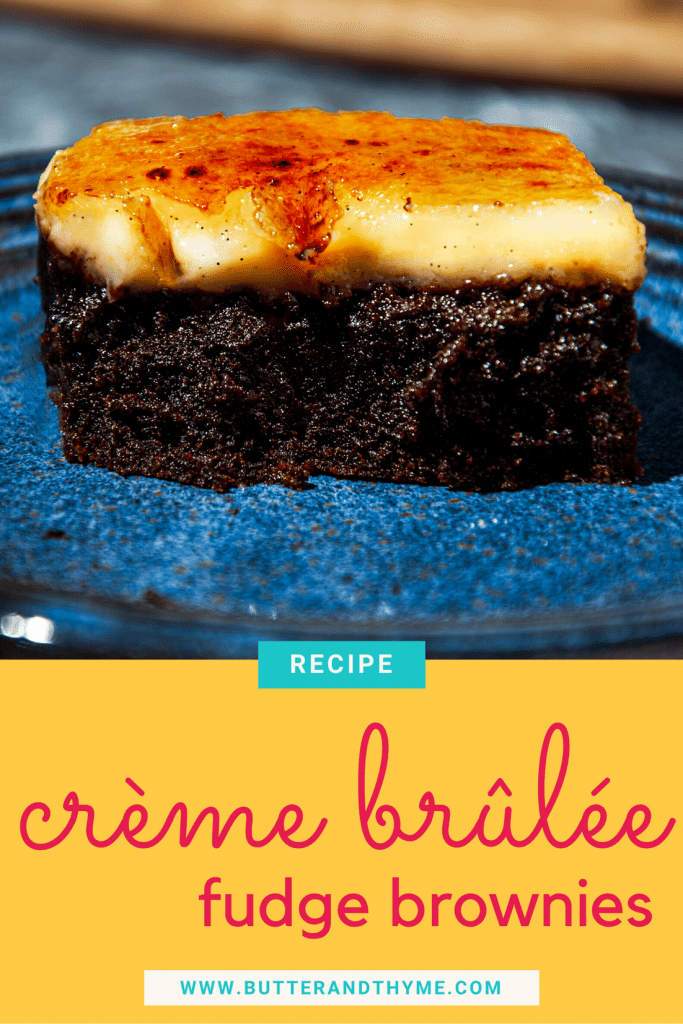 I’m generally an indecisive person, which is probably why I love creating mashups of multiple foods I love. In this case, probably my two favorite desserts of all time– creme brûlée and fudge brownies. I couldn't choose between the two, so I went with both! And the combination resulted in the most ridiculously decadent brownies I've ever tasted!!

These creme brûlée brownies are an amazing treat to celebrate a special occasion. They look impressive, but they're actually easier to make than you might think. And if using a blow torch sounds intimidating to you, I also include instructions on how to make these using the broiler setting in your oven.

And if you love chewy fudge brownies, try out my other favorite brownie recipe, Nutella brownies.

It's subtle, but if you look closely you can see the difference in texture. Superfine sugar feels similar to table salt in your hands, while granulated sugar has slightly larger crystals.

How to Make Creme Brûlée Brownies

To make creme brûlée brownies, we'll start by making one-bowl fudge brownies. I make them in a stand mixer, but you can also mix them by hand or with an electric handheld mixer.

Start by whisking the eggs with sugar, salt, vanilla, and water, until light and fluffy. This step incorporates air to give the brownies lift. Since there's no chemical leaveners in this recipe (i.e. baking powder or baking soda) it relies on mechanical leavening method through whipping the eggs.

Then, add the melted chocolate and oil. Finally, fold in the cocoa powder and flour. Do this step by hand to avoid over-mixing.

While you let the brownies cool, you can make the creme brûlée topping. First, heat the heavy cream and vanilla bean to a boil, then remove the pot from the heat. Mix the eggs with sugar, cornstarch, and a pinch of salt.

Now, carefully add the warm vanilla cream to the egg mixture a little bit at a time, whisking after each addition. You need to do this part slowly because the cream is hot, and you don't want the eggs to curdle.

After all the cream is incorporated, return the mixture to the pot and heat until thickened.

Once the creme brûlée layer is cooled and set (after a few hours in the fridge) sprinkle a thin, even layer of sugar over the top.

Finally, spread the creme brûlée mixture on top of the cooled brownies in an even layer.

Melt and caramelize the sugar using a blowtorch. If you don't have a blowtorch, you can use your oven's broiler setting (see notes below).

Careful! If you are using the broiler setting, first make sure that your pan is broiler safe. Glass pans could potentially shatter under the extreme heat of a broiler. I would start with the low broiler setting and check after a couple of minutes. Keep a close eye on it, because it will change color very quickly, and you don't want it to burn.

If you're using a kitchen blowtorch, you should hold it a few inches above the surface. Aim for constant slow movement back and forth. It will take a little bit of time for the sugar to turn the desired golden brown color, but if you do it too quickly or with too intense of a flame you risk burning some areas. It's a lot like making s'mores in that way.

For the creme brûlée, try experimenting with different flavors! Vanilla is amazing, but one of my other favorites is coffee creme brûlée. Instead of adding a vanilla bean, steep the cream with coffee or espresso beans for 30 min. Here are some other fun flavor ideas to try:

If you're looking for more over-the-top decadent brownie recipes, try this recipe for Nutella brownies.

Technique: How to Split a Vanilla Bean

Use a paring knife to make a deep slit down the center of the vanilla bean.

To scrape the seeds from the vanilla bean, use a small offset spatula, a spoon, or the back of a knife.

Use your fingers to open vanilla pod, revealing seeds inside.

Add the seeds to the cream for creme brûlée. Save the pod and throw that into the cream too for extra flavor extraction!

If you can't find vanilla beans at your local grocery store, they are easily available online. And they'll keep for about a year!

How to Store Creme Brûlée Brownies

Creme Brûlée Brownies are best eaten immediately after caramelizing the sugar. After you brûlée the tops, you can store them in the refrigerator for a few hours. But wait much longer than that, and the crunchy tops will begin to soften. Which isn't horrible, they just won't be quite as good.

For this reason, it's better to finish only the brownies you'll eat right away. You can store creme brûlée brownies without the crunchy sugar topping in the fridge for 2-3 days. When you're ready to eat them, top with sugar and quickly torch before serving.

Is creme brûlée a custard or a pudding?

Custards rely on baking to set because they do not include a thickening agent (like cornstarch). In this recipe I added cornstarch to help set the "creme brûlée" since we don't bake it, which technically makes it a pudding. Cornstarch also helps prevent curdling! It's just a minor difference, they are very similar in terms of taste and texture.

AND if you add a little more cornstarch to pudding and finish with butter, it becomes pastry cream. Which is what's used as the cream filling in treats like eclairs and Boston cream donuts.

How do you fix a broken custard?

This actually happened to me when I was testing this recipe, so I can say this works for sure! I’m still getting used to my gas stovetop, everything happens so much faster-- it went from perfect to curdled in a matter of literally 10 seconds.

So naturally, I quickly Googled “how to fix a broken custard” and I was instructed to put the pan into cold ice water and whisk it vigorously. So that’s what I did. But that wasn’t working and my arm was getting tired. So I grabbed my immersion blender, and with the pan still in the ice water, I started to pulse the blender a few seconds at a time. It took a minute or two, but eventually it came back together! So if you have to do this, just be patient, and it should work eventually.

Can I make creme brûlée without a torch?

Yes! Just like creme brûlée brownies, you can make creme brûlée using a broiler instead of a torch. Many recipes will include instructions for this, since most people probably don't have a kitchen torch.

Does expensive vanilla make a difference?

Yes... sometimes. When vanilla is the star of the recipe, as it is in creme brûlée, I recommend splurging on real vanilla beans or a high quality vanilla bean paste. You can taste the difference!

But in most cases, like adding a splash to cookies or brownies to balance out chocolate flavor, I'll use any regular vanilla extract. Or if you get a high quality extract like this double strength pure vanilla extract, you can use about half as much and get the same results. 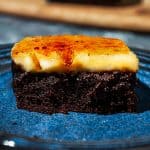 These creme brûlée brownies are the most ridiculously decadent brownies I've ever tasted!! The brownie layer is chocolatey, chewy and fudgy. That's topped off with a layer of smooth and creamy creme brûlée made with real vanilla beans! For the final touch, they're finished with a layer of sugar that gets melted and caramelized for a delicious crunchy topping.